SPOILER WARNING. If you have not watched The Hobbit: The Battle Of The Five Armies, please proceed with caution as this entry contains spoilers, or do not proceed to read at all until you’ve watched it.

I watched The Hobbit: The Battle Of The Five Armies today (at a press screening at 9 in the morning. In a cinema out of town. Because they made us. Trust me, I only wake up at 6 o’clock for Peter Jackson.) And here is my ‘reaction post’, which is a fancy phrase to say ‘notes about the movie that are not turned into a review yet.’

Again, the spoiler warning applies. I do not want to be responsible anyone getting spoiled.

If you have no watched the film, the next line is the start of Too Much Information for you.

(And if you scroll all the way down to listen to the sound bites, Richard Armitage’s sound bite may contain spoilers. Martin Freeman’s should be spoiler-free.)

END_OF_DOCUMENT_TOKEN_TO_BE_REPLACED

The Hobbit: The Battle Of The Five Armies panel just ended at Hall H, San Diego Comic-Con 2014. According to reports, it was attended by Peter Jackson, Philippa Boyens, Andy Serkis, Evangeline Lilly, Elijah Wood, Graham McTavish, Benedict Cumberbatch, Cate Blanchett, Luke Evans andLee Pace. Host is Stephen Colbert (who is the real hero of the panel, in my opinion). The three main actors Ian McKellen, Martin Freeman and Richard Armitage did not attend because of their filming/stage projects.

They shared a gag-reel (which is quite funny, according to descriptions) and a teaser trailer. I’m sure we will get to see them both eventually, but the description for the teaser trailer was massively epic because it ended with a strong Thorin Oakenshield and Bilbo Baggins moment.

(Descriptions by Silas Lesnick of Comingsoon.net via their live-blog.)

Set to a somber musical version of Tolkien’s “The Walking Song,” the teaser is all about building the intensity of this giant, giant battle

We see all the characters preparing for battle. Troops of Orcs, Elven warriors, etc

At the end, Thorin asks Bilbo to stand with him one last time

According to Total Film’s Tweet, the last line there goes:

Smaug doing a strife across Laketown

Galadriel walking barefoot across a battlefield. She kneels and kisses a wounded, unconscious Gandalf on the head

Thranduil in battle? His Supreme Bitchface in armor, which Lee Pace himself Tweeted yesterday. (Along with the Comic-Con poster released before that.) 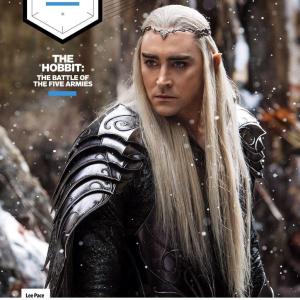 At the end of the panel, Peter Jackson announced The Hobbit Fan Contest, which will give the fans a chance to go to New Zealand. The contest will invite 75 winners (each with a guest) to The Hobbit: The Battle Of The Five Armies premiere in New Zealand in November. Go to the website and register!

Some photos from the panel (via Warner Bros Twitter): 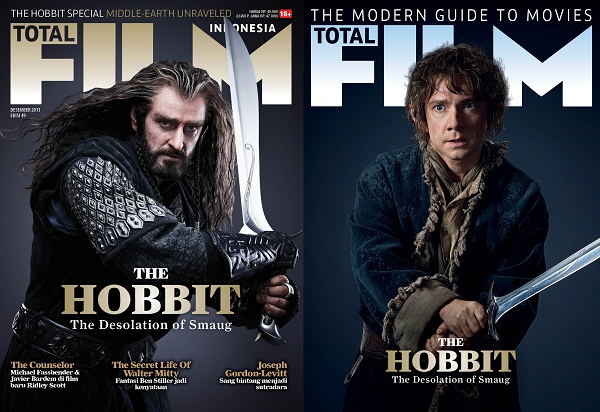 This is a folding cover. So Bilbo’s picture can be folded inside so that you get double The Hobbit covers. Last year we did Gandalf & Bilbo. This year, we decided to do Thorin and Bilbo because everyone in the office really liked Thorin’s pose (but Bilbo is a must). More info on Total Film Indonesia #49.

This actor faces many dangers and finds plenty of inspiration to play his kingly role. How far would Richard Armitage go to breathe life into Thorin Oakenshield in The Hobbit: The Desolation Of Smaug?”

Richard Armitage (only) feature on Total Film Indonesia issue #49. Do not use without permission.

At more than six feet tall (according to his IMDb page, he’s 1.89 meters tall), Richard Armitage is as far from a regular dwarf’s height as possible. And with his calm and courteous attitude, he’s also far from villainy as possible. However, for some reason we can’t quite fathom, he has never been cast as a straight-up protagonist before being hired by Peter Jackson to play dwarf king Thorin Oakenshield. Just look at his Guy de Gisborn in the Robin Hood TV series, Lucas North in Spooks and Heinz Kruger in Captain America: The First Avenger (for those of you who didn’t notice him, he’s that guy who shot Stanley Tucci’s Abraham Erskine after Steve Rogers got buffed up by the super soldier serum).