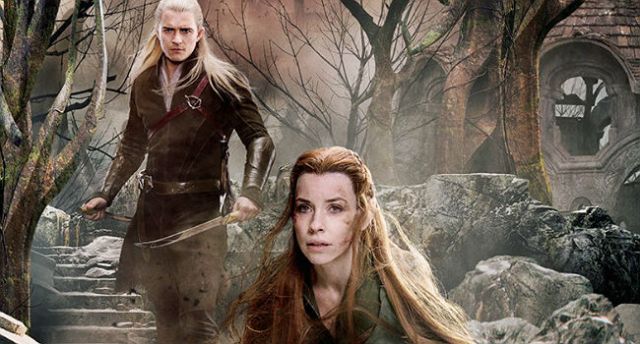 When All Film met up with Orlando Bloom and the other cast members of The Hobbit: The Battle Of The Five Armies in London a few months ago, we couldn’t help but sneak in one important question to the actor we’ve affectionately referred to as ‘Orly’: tell us more about the Elves and Dwarves.

The question is not without basis. We are quite delighted when we saw that scene The Hobbit: The Desolation Of Smaug where Bloom’s Legolas called his future companion Gimli “a goblin mutant” to Gimli’s father’s face. Not only was it an amusing homage to their amazing friendship in Lord Of The Rings trilogy, but it was also apparently a setup for another blossoming Elf-Dwarf friendship between Legolas’ friend Tauriel (Evangeline Lilly) and the dwarf Kili (Aidan Turner). We wouldn’t go so far as to call it a love triangle but we know there are a few out there who call it exactly that.

So rather than speculate, why not ask Bloom directly what he thought about the relationship? And the actor responded spectacularly.

“It’s a good question, isn’t it? You tell me,” he responded to All Film and admitted,  “I think that calling it a love triangle is a little extreme.”

Fair enough, but Bloom also explained that Tauriel was Legolas’ kin and so he was protective of her. “You can probably read all sorts of things into all of that,” he acquiesced.

More importantly, Bloom continued, the relationship between Legolas and Tauriel, as well as Tauriel and Kili, was “an interesting and clever element to bring to that story, because I think you’ll see it as it comes to its end in this movie, you kind of get to see through Legolas’s eyes: the history of the Elves, and the Dwarves and Men, and in a way you understand why he is the elf that goes into The Lord of The Rings. Through what he has experienced in the Hobbit, he becomes that character. In this instance, he is still experiencing all that stuff, so it’s quite fun to play with that.”

While Bloom didn’t report any sort of off screen shenanigans between Elf actors and Dwarf actors on the set of The Hobbit, we’re pretty sure there was still a bit of mischief that happened during the course of filming. Of course we’d prefer it if all the bitter rivalries and fighting between these two races happened solely on screen on Peter Jackson’s last The Hobbit film.

This interview can be read in full in All Film #60. For more info, read here.