So you saw Kingsman: The Secret Service and you decided it was awesome. And Colin Firth rocks as a gentleman spy who kicks ass while wearing posh suits and fancy eyeglasses. If that’s what brought you here… WELCOME!

Welcome, my friends, to my appreciation post for Colin Firth’s excellent acting and his natty eyewear that his roles on movies seem to favor these days. Ever since Tom Ford put him in those vintage glasses in A Single Man, it seems that he’s never without them in the movies. (He probably needs to wear them in real life, too, though.) And as a longtime fan of Mr. Firth and someone with an eyewear fetish, I thank all the costume designers in those movies where he plays characters with eyeglasses.

The entire movie is stylish – and deeply emotional – but what I didn’t expect was for the eyeglasses to be so striking. It adds gravitas to Firth’s George Falconer, making him what he needs to be in the story (a college professor, an older partner to his lover, a weary man dealing with grief and loss), and gives him a distinct style that’s not easily forgotten. At first glance, it may seem as a simple fashion statement, and it certainly is that because this style seems to become popular after the movie came out, but when you look deeper into the background of this character, you find out that the character does need to wear them in the story.

As Bill Haydon in this John le Carre adaptation, Colin Firth appeared to be the poshest spy at the Circus. Perhaps it was an indication to his sexuality (he’s a closeted bisexual, if I’m not mistaken) but to me, when I saw him with those glasses, he immediately struck me as a “charming but probably deadly bureaucrat” (as opposed to George Smiley’s “boring but deceptively powerful bureaucrat” look). This entire movie was crafted well and acted well by an ensemble cast that included some of the best actors in the industry. I can’t say Firth was the best performer there but he was definitely one of the stand outs. 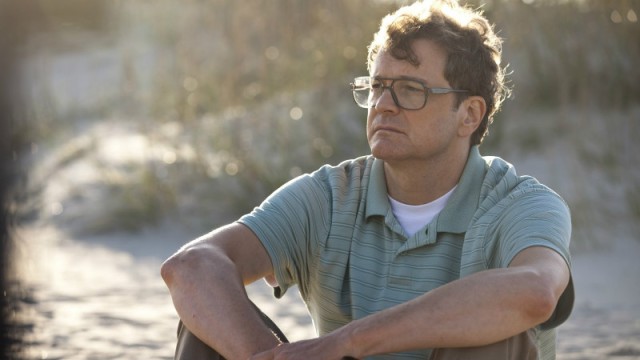 I’ve not actually seen this movie where Firth plays a former golfer who faked his own death so that he could create a new identity and live an entirely new life. It’s definitely on my To-Watch list but from what I can see from the trailers of this film, his character looked like a complete loser in the beginning but gradually changed to be someone more ‘cool’. Judging by style of that pair of specs, I wouldn’t be surprised if he wanted to have a new life… no one should be saddled with them!

This Gambit remake starring Firth and Cameron Diaz was probably one of the worst movies of 2012. Had it not starred Colin Firth, I wouldn’t have watched it simply for the fact that Diaz’s acting is the height of atrocity. Thankfully, Firth’s Harry Deane remains classy… the glasses fit in with the image of a witty and clever curator. The character probably didn’t need it (Michael Caine’s original version certainly didn’t) but perhaps it was one of the ways the filmmakers could distinguish this new version of the character from the old one. Whatever the reason, I still enjoyed watching him with them.

This film just about gutted me and it was extremely hard to watch. Based on the true story of the life of a POW, Eric Lomax, set partially during World War II, I almost didn’t finish the film at all because it was just not my cup of tea (I’m more into Cold War-set films than World War-set ones). And because this is a true story and Lomax is a real person, there’s no fashion statement here – the real Lomax wore glasses and so Firth must don them too in this biopic. Firth was convincing in this role, so much that he evoked strong emotions from me, but I was glad to reach the end of the DVD.